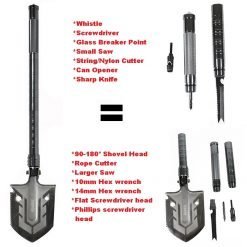 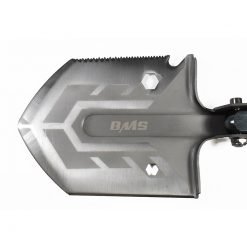 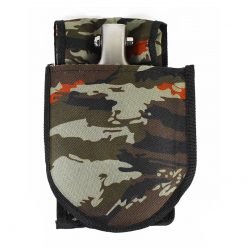 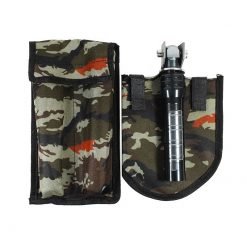 When you are outside in the bush, having the right tool at the right time is indispensable. This is the cooler version of the Swiss Army Knife from our youth.  But this tool is bigger, stronger and much, much more useful!  It will adjust at 90 and 180° angles to be used as a shovel to dig and to pull dirt easily. Our BMS Survival Shovel is more than just an adjustable shovel though.

The shovel itself is has a sharply serrated edge so that it can be used as a saw and the upper part of the saw has a particularly sharp crook that is used to cut heavy rope.  In addition, the shovel also has a 10mm and a 14mm hex-shaped cut out of the metal so that the shovel can also be used as a wrench.  With the long handle attached, you will get a lot of torque with this wrench!

Opening up the handle you’ll see a handy storage area that contains a whistle, a blade with a sharp, straight blade knife on one side and an additional smaller serrated saw on the other.  The smaller saw, like the larger one on the shovel, also has a crook at the end to cut string or nylon cord. Another helpful piece hidden in the handle is a screwdriver head, a Phillips head on one side and flat-head on the opposite end.  Both the blade and the screwdriver head can be screwed into the end of their own handles, as the entire shovel handle breaks down into three convenient pieces.  At the very end of the main handle is a glass-breaker point.

The tool breaks apart and is stored in two small, strong, nylon pouches for easy concealment in an already crowded van or in a backpack for a hike up the mountain!

This site uses Akismet to reduce spam. Learn how your comment data is processed.